skip to main | skip to sidebar

I was very excited about the new robot API, but after reading a bit in the new docs' and sources I decided to freeze the project.
In my opinion the new API is too focused on activeness of a robot and Google turned the architecture into a bunch of uncontrolable code.Maybe I will skip a generation and look at it later...

So thank you for your support, the old version (7.0 wasn't it?) is still deployed and working. The datasets in the database will not be deleted. You can still try out and look how it was like programming with the_old_robot_api
anno 2009.
Codesite and subversion is still online and if you have an interest in the programming or the algorithm used please ask me- write me a wave *g* or email / buzz / tweet me.
Bye!
Eingestellt von Thomas Jungblut um 22:36 Keine Kommentare:

the new API is deployed!!!! yaaay.

But I'm much into work now and won't update the bots till 2-3 weeks. My damned PC-Screen break-down and I am waiting for my new "Nvidia 3D Vision Ready Full HD" Monitor.

I took a closer look at the new iterators, looks pretty clean for me. But at least this is a 180 degree turn of functionality and I guess I have to built it up again from zero.

In my opinion, Pamela Fox will release a new version of her exporty bot in python. I'll wait for her ;D

I deployed a new version with a changed usermessage. The whole export thing in the sandbox seem to be buggy as the bolding in the message.
I don't have much time to look at this closer... I'll give you more updates later.
Eingestellt von Thomas Jungblut um 20:08 Keine Kommentare:

I am now really into work (after evening too ;D) and can't reply to every message.
I am very glad to hear, that you have much interest in my tools and I am planning more robots.

But I need your ideas !
So please mail me more ideas, I found really nice ones' last week in my inbox.

If you are using portexy now, please read the appended textblip. I know that 15th is over, but the new API is not released now. Please be gentle, if you want the source code you can find the subversion at the code side.
Everything you need is in the sidebar.

After some days of setting up a new laptop etc pp I found time to structure the porteXy v7.
I did not fix any of the bugs below, but I outsourced the html into a single class and added a pdf class. The pdf class will be a new exportation type, for the parsing I use pdfjet, this might be compatible to AppEngine.
We'll see.
So v7 provides the new features:
Both of them are not live yet, but locally I am now testing some features. And yeah, I really need to fix the bugs.

Thx for all the positive answers to the bot :)
Eingestellt von Thomas Jungblut um 16:51 Keine Kommentare:

There are some problems:

I'm looking at these issues after the new api deployment. I guess I will have to deploy a complete new robot afterwards too.
Eingestellt von Thomas Jungblut um 18:27 Keine Kommentare:

I stood up really early this morning and added some new features to porteXy.
I will put the source up in a few minutes. The links below are still valid.
I put the source up and solved some issues with the password. I will comment it later today.
There is still a problem with the link to the original wave, I will investigate it. 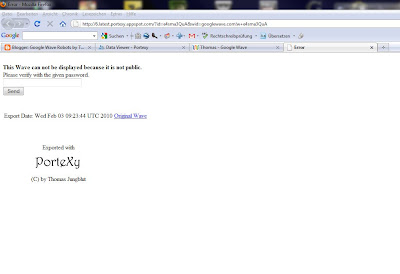 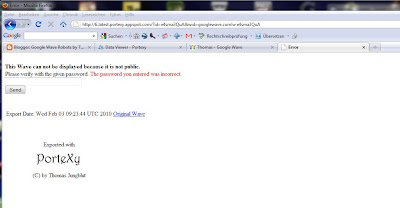 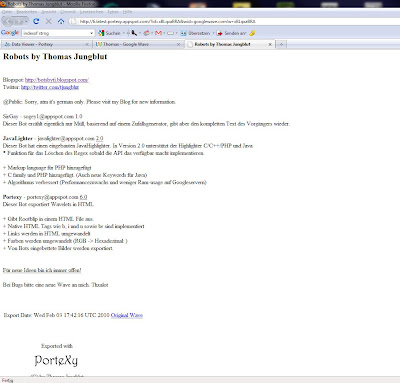 A few things need to be done though, but I will have a look at this later this week.
I also decided to write a little tutorial for JSP's and Google Wave, because there is none :)
Eingestellt von Thomas Jungblut um 21:45 Keine Kommentare:


Exports the whole content of a wavelet into html code

If you find an issue with porteXy, feel free to open an issue here:

You can also find the Sourcecode there!

I have several Google Wave invites left, if you want to have one of them please leave a comment or write me a mail.